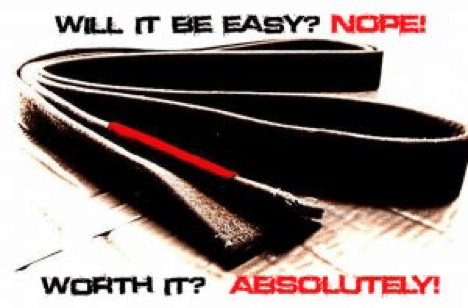 In the 1950s and 1970s, martial arts exploded into American culture. In 1984, The Karate Kid changed the dynamic of who trained in martial arts academy’s and why. The movie went deeper into the character traits developed in martial arts than any of its predecessors ever had.

“Why you train Karate?” Mr. Miyagi famously asked. “So I don’t have to fight.” Daniel San replied.

Parents responded to the movie. We’re all looking for ways to keep our kids out of trouble and off the street. None of us want our kids to get into fights, but we all want our kids to be able to defend themselves. So, after this movie released, millions of kids around the globe began training in karate and other martial arts.

It didn’t take long before it became common to see a young child, some as young as 9 or 10, wearing the coveted Black Belt. In fact, if you ask 10 people around you, it’s quite likely that they have a child, or know a child that has earned a black belt at a young age.

Now don’t get me wrong; I’m not judging what other schools do. If a black belt is a way they find to motivate kids to live better, morally correct, healthy lives, so be it. It’s my opinion, as well as the opinion of the founders of Kosho-Ryu and Kajukenbo, that children don’t need cloth belts to motivate them.

Years ago, long before martial arts became popular in the United States. It wasn’t long until they decided, not only could a child not earn a black belt, but they could not earn ANY rank that was the same as an adult rank. Simply put, most children haven’t lived enough life to truly understand what it means to be courageous or selfless, or humble.

You may be wondering what this has to do with rank. It’s this simple; all of our students are expected to uphold a strong black belt to character values. Values such as discipline, respect, selfless service, integrity, and so on … This is intimately connected with rank. At our martial arts academy, we believe children cannot have the same full black belt ranks as an adult. In fact, our young students will receive a Jr. Black Belt (Probationary) for anyone under the age of 17.

Our Jr. Black Belts have the same knowledge and material as an adult black belt and are able to teach any age.  However, I want to ensure they can handle the responsibility of wearing a black belt. Once they reach the age of 18 and have continued to demonstrate black belt values they will receive their official black belt and teaching, certificate.

With all black belts, child or adults they must maintain the integrity of the art. I need to ensure that the James Martial Arts Academy black belt practitioners are capable and highly skilled and able to defend themselves against adults as well as making certain that our practitioners are good people. That’s why you’ll never see a child wearing a full Black Belt at the James Martial Arts Academy.