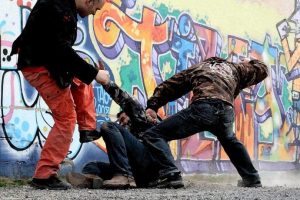 After graduating from college, where I played football for a Division I team, I was in search of a workout that would challenge me while keeping me in good shape during my search for a martial arts training program in my hometown of San Diego, CA. I read the article below by Professor John Bishop in Black Belt Magazine, which changed my martial arts life and led me to train in the arts of Kajuknebo and Kosho-Ryu with Sr. Grand Master Tony Bowles and Grand Master Tim Bowles.

Today MMA and BJJ are popular and are good martial arts. However, when you are investigating a martial arts system in San Diego for you or your family, I would caution you to keep in remind that there are additional factors in a fight.

Are there multiple attackers? If the answer is “YES,” do not want to end up on the ground because of the “plus one factor.” While you’re on the ground trying to submit the first attacker, his buddy is punching you, or worse, kicking you in the head. Read the 3-minute article below and see why I selected Kajuknebo and Kosho-Ryu.

Food for thought! Do you want to study a martial art which focuses on one aspect of self-defense, or on which will teach you how to defend yourself against a gun, club, and knife? Remember, the bad guy is not one dimensional, so you need to be prepared.

Battle of the Arts
by John Bishop (Black Belt, May 94)

Brutal, deadly, overkill, street effective. These and many other such terms have been used to describe both Kajukenbo and Gracie jiu-jitsu. Kajukenbo gained its reputation for being brutally effective decades ago in the U.S. Territory of Hawaii. Since then, it’s eclectic use of five martial arts, and it’s a no-nonsense approach to self-defense that has contributed to its strong reputation as a highly effective self-defense system.

Since then, it’s eclectic use of five martial arts, and it’s a no-nonsense approach to self-defense that has contributed to its strong reputation as a highly effective self-defense system.

In recent years, a South American martial art known as Gracie jiu-jitsu has taken North America’s martial arts community by storm. This highly effective Brazilian system has been embraced by many martial artists who have come to realize the ground fighting limitations of their styles.

In this article, Black Belt discusses these systems with two of the world’s premier instructors of these arts.

Gary Forbach teaches Kajukenbo in San Clemente, Ca. He is a former two-time national champion and a 7th-degree black belt. He has produced over 30 training videos on Kajukenbo and has conducted Kajukenbo seminars around the world.

His training in Kajukenbo has covered close to 30 years. For the last 15 of those years, he has trained directly under the founder of Kajukenbo, Adriano D. Emperado.

Reylson Gracie teaches Gracie jiu-jitsu in Corona Del Mar, Ca. At the age of 4, he started his training under his father, Carlos Gracie, the founder of Gracie Jiu-Jitsu. By age 14, he was teaching for his father in the original Gracie Jiu-Jitsu Academy. By age 18, he was a black belt with students of his own. Now at age 50, he is the highest-ranking practitioner (8th degree Grand Master) of Gracie Jiu-Jitsu in the United States.

Kajukenbo is a prime example of American ingenuity. It is also America’s first martial art system, having been founded in 1949 in the U.S. Territory of Hawaii. According to Forbach Kajukenbo’s inception came about in 1947, when five Hawaiian martial arts masters calling themselves the “Black Belt Society” started on a project to develop a comprehensive self-defense system.

Together these men trained for several hours each day, taking advantage of each other’s strengths and weaknesses to develop their new art. When Joe Holck and Peter Choo would spar, Holck could see his weaknesses in striking techniques, and Choo would realize his vulnerability once he was on the ground.

Emperado was able to show Choo how a Kenpo man could work inside a kicker with rapid-fire hand techniques. Chang, in turn, showed the others how the circular, flowing techniques of Sil-lum Pai were used to evade and strike. And Frank Ordonez showed everyone how to go with an attacker’s force and then re-direct it against him with painful locks and throws.

After it was decided that Kenpo would be the base to build on, it was a long three-year process incorporating the tang soo do kicks, jujitsu joint locks, judo throws, and sil-lum pai circular techniques into a complete system.

Now all the system needed was a name. Joe Holck suggested that the name should be “Kajukenbo”, ka for karate, Ju for judo and jujitsu, ken for Kenpo, and bo for Chinese boxing (kung fu).

Today Kajukenbo is practiced all over the world. The chief organization for Kajukenbo is the “International Kajukenbo Association”, based in Oakland, California.

When Kajukenbo was founded, people no longer had a need for battlefield training. Warriors on horseback, armed with swords and spears, had been replaced by street thugs armed with knives and clubs. Kajukenbo was specifically developed with this in mind. Like most karate systems, Kajukenbo has katas or forms.

These 14 katas are known as “Palama Sets” 1 through 14. ( These katas were formerly known as Pinans. Forbach explains that in February of 1993, Professor Adriano D. Emperado renamed the katas to show their origin, the Palama Settlement of Honolulu, Hawaii.) Like traditional systems, Kajukenbo takes many of its self-defense techniques from its katas.

By combining techniques from tang soo do, Judo, Jujitsu, Kenpo, and kung fu, the Kajukenbo stylist can defend himself in many ways. He can use soft circular kung fu techniques to evade and strike. Or he can use judo or jujitsu to throw an attacker to the ground. Forbach feels that the strength of Kajukenbo is in how these techniques are combined.

For example, if the attacker punches, the Kajukenbo stylist may step into the attack at a 45-degree angle while blocking with a soft palm block. He would then counter-attack with several rapid-fire Kenpo hand strikes followed by a judo foot sweep. Once on the ground, the attacker could be struck again or controlled with a jujitsu lock.

Although some martial artists may describe this as overkill, Forbach feels that an attacker may not be stopped by one strongly focused blow. Therefore the theory behind Kajukenbo is that it is better to counter with a multitude of techniques that can be ended when the threat no longer exists than to rely on one technique and find that it is not enough.

Gracie Jiu-Jitsu
The development of Gracie jiu-jitsu started more than 65 years ago. Brazil, in the early 1900s, was an immigrant country. Like George Gracie, who had immigrated from Scotland, many Japanese people immigrated to Brazil.

Brazil is said to have the largest population of Japanese outside of Japan. According to Reylson Gracie, his grandfather Gastao Gracie played a significant role in assisting Japanese immigrants to establish a community in Brazil.

It was at this time that Gastao met a man named Mitsuo Maeda Koma. At the time, Koma was recognized as the world champion of jiu-jitsu. Because of Koma’s jiu-jitsu exploits, he was awarded a government position by then Crown Prince Hirohito. This position made Koma in charge of overseeing Japanese immigration into Brazil.

Before long, Gastao and Maeda formed a strong friendship. As a favor, Maeda started to teach jiu-jitsu to his friend’s son Carlos. This was in about 1918. When teaching Carlos jiu-jitsu, Maeda always impressed upon him the importance of keeping his knowledge secret, because non-Japanese were never taught jiu-jitsu. Carlos was given the provision that he was only to teach it to family members and not to the public.

Carlos kept this agreement until Maeda’s death released him from it. Before he started to teach the public, Carlos taught jiu-jitsu to his brothers. When asked about the statements made in print that Helio Gracie was the founder of Gracie Jiu-jitsu, Reylson had a simple answer. “Helio was the youngest of my father’s four brothers. Helio was only six years old when my father started training in jiu jujitsu.

It is true that some of the Gracie’s have added some of their own innovations to their teachings, but my father was the one who founded Gracie jiu-jitsu. He was also the first man to teach jiu-jitsu in Brazil.” Carlos Gracie had four brothers who were black belts under him and ten sons who he trained to black belt level.

Besides his brothers and sons, there are grandsons, nephews, and grandnephews, who carry on the Gracie tradition.

The main organization for Gracie jiu-jitsu is the Federation of Jiu-Jitsu de Rio, headquartered in Rio De Janeiro, Brazil.

The Techniques of Gracie Jiu-Jitsu
Although jiu-jitsu, in general, employs striking, kicking, throwing, and ground fighting, the strong point of most jiu-jitsu systems is their joint locking techniques. Gracie jiu-jitsu uses all the techniques mentioned above plus techniques borrowed from boxing, karate, and many other fighting systems.

According to Reylson the Gracie’s have always looked at different fighting systems to see what they have. If they see something that they like, they use it.

Traditionally, Gracie jiu-jitsu is taught only in private groups of three students. The number three is used so that the students can train with a partner as the instructor works with each student.

I want them to be able to defend themselves in most situations. That’s why at first we don’t spend a lot of time on the fine points of jiu-jitsu. We get down to pure self-defense. All I need to do is to teach students how to react intuitively.

You don’t have to be perfect to escape danger; you only need to have the right idea. When it only takes you three seconds to make the right move in a fight, thirty-six hours with me is more than enough time to learn practical self-defense.”

After a student completes his first thirty six-hour courses, he can either discontinue his training or continue with his private instruction. There are over one thousand techniques in the Gracie system. Reylson firmly believes that the study of Gracie jiu-jitsu, like other martial arts, is a lifelong journey.

In Conclusion
Now we come to the big question, which is better Kajukenbo or Gracie jiu-jitsu?

Everyone who has witnessed Gracie jiu-jitsu in action comes away with the same opinion. This being that there is no one better at ground fighting than the Gracie’s. And if it’s true that 96% of all fights go to the ground, then Gracie jiu-jitsu is one system you may want to add to your training. Aside from grappling superiority, Reylson is the first to admit that his system does have weaknesses when it comes to fighting multiple attackers.

He elaborated by saying, ” I once fought four guys and won, but I’m no superman. After I beat the first one quickly, the other three ran away. If they had all attacked me at the same time, it would have been a different story”.

Kajukenbo’s strength lies in the fact that it was designed for modern street self-defense, and that it utilizes the techniques from five systems. By combining these systems, the Kajukenbo stylist can fight on his feet, on the ground, or against multiple attackers if necessary.

When comparing systems, in the end, the superiority of a system can only be judged by the abilities of the individual practitioner.